The hundredth year of the Lake Forest Academy Spectator 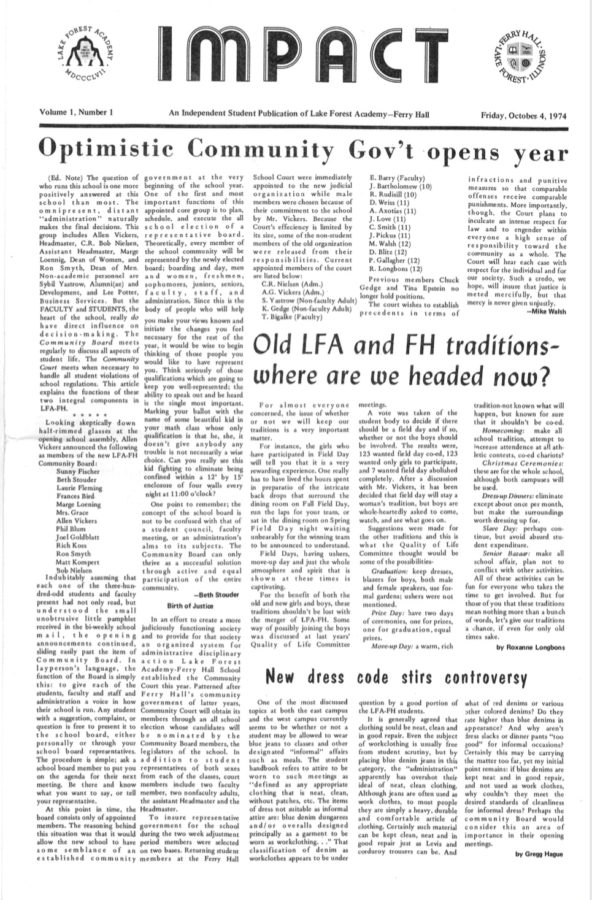 The newspaper after Ferry Hall and Lake Forest Academy merged into one school; rather than choosing between the two old names, a new one was created: The Impact.

100 years ago, the United States was flourishing; the country was in the midst of the “Roaring 20s,” filled with flapper dancers and smooth jazz at every corner. During the 100 years to follow, the US landed a man on the moon, stormed the beaches of Normandy, and made great strides towards racial equality empowered by individuals such as Martin Luther King Jr, Rosa Parks, and Malcolm X. Though these events may seem starkly different, there is one major constant amongst them all: press. Journalism has survived through almost all events in modern history and is a major component in the history of the United States. Lake Forest Academy is currently celebrating their 100th anniversary of their own newspaper, The Spectator, and its dedication to local news throughout its existence.

The first paper on record was from 1896 entitled The Weekly Bulletin. At this time, Lake Forest Academy was near Lake Forest College and much of the news was combined between the campuses. Stories such as “Students of the University celebrate at the Art Institute” and “Ferry Hall is favored” allowed students to have a sense of the current events while keeping the stories brief.

When the paper first began in 1906, under Headmaster William Mather Lewis, the staff was a male-dominated eight person staff. The Spectator was then a hand-printed operation composed of short articles, student-drawn cartoons, and advertisements from local companies. The paper featured a heavy emphasis on Caxy sports—so much so that the captains of each team had their own title in the paper. Priced at one dollar a year for a subscription, The Spectator’s first ever article was entitled “Opening Exercises,” and talked about the start of the 50th year at Lake Forest Academy. While Lake Forest Academy had The Spectator, Ferry Hall had their own paper, The Almanack. Though both papers were similar, The Almanack was focused on life at the all-girls school Ferry Hall and the events that progressed there.

Until 1973, The Spectator ran in this manner: a male-led, athletically-focused paper. With the merging of all-girls school Ferry Hall and all-boys school LFA in 1974, the school’s paper underwent serious changes.

First, the staff shifted from a strictly male eight-man team to 25 member staff composed of both men and women, featuring new positions such as “Political Observer” and “Community Court”. It grew to eight pages and even took on a new name: Impact. This title stayed for 11 years, until it reverted back to The Spectator again in 1986. By this point, stories were being published with the headlines “New dress code stirs controversy” and “Old LFA and FH traditions—where are we headed now?”— sparking stark resemblance to the articles that The Spectator still covers today. As the paper continued to grow, so did the program.

When the journalism program was taken over by William Murphy, English Teacher, in 2006, it was managed by seven students who had been producing an eight page paper. The program only had two branches—Journalism Ⅰ and Journalism Ⅱ—dedicated solely to upperclassmen. Within two years, Murphy had grown the paper to 12 pages and founded a Journalism Ⅲ program for seniors, thereby allowing sophomores to enroll in Journalism Ⅰ. Eventually, The Spectator grew large enough to support 40 students and produce 20-24 page editions. This was, according to Murphy, “really amazing,” as “there is no other department in the school that has 24 pages of kids’ work every month being put on display.” Murphy also expanded the paper’s individual sections, such as that of the Opinion Editorial (Op-Ed) which was, “considered to be one of the best in the Midwest.” Furthermore, he even helped create new sections such as “Caxy Rants and Caxy Raves,” which allowed for students to express their opinions on colloquial topics, alongside the establishment of the first centerfold. During his years leading the program, Murphy helped create a solid foundation for the modern-day format of The Spectator—much of which remains today.

In 2018, Amanda Krause, Journalism Program Coordinator and English Teacher, became The Spectator’s new faculty advisor. Krause merged each section of journalistic media—both digital and print—into one, mainly student-centered program. In addition to recognizing the growing shift to digital media, Krause did this in order to establish a “holistically functioning newsroom that reflected the sense of a real one.” In recent years The Spectator has seen a significant increase in staff diversity — a component that Krause focuses on heavily. In order to accomplish this, Krause has advertised the program’s availability to all English 9 sections, as well as the ESL and ELL programs. She thinks it is important to realize that, “people take journalism for different reasons,” and that students should be “empowered to take the program.” In 2020, Ramya Herman ‘21 became the first black Chief Editor of The Spectator which, according to Krause, shows how, “the voice grew organically from everyone feeling that they had a role to play.” In addition to this, Krause helped with the formation of the podcast with former students Nicholas Alutto ‘21, Rohan Miglani ‘21, and James Kuhns ‘21. The podcast focuses on reporting school news in a colloquial manner with interviews from individuals such as José De Jesús, Head of School, and Anna Kliner, Director of Health Services. Krause also introduced Journalism Ⅲ: Advanced Journalistic Writing & Reporting—a groundbreaking accomplishment in The Spectator’s history. The program grants a senior English credit to students who have completed all three journalism courses at LFA. Overall, Krause feels that, “Whether or not you see yourself pursuing journalism professionally, high school journalism is one of the most student-centered, authentic experiences you can have.”

From what started as an eight-member all-white male team to a 40-member, mixed-gender, diverse paper, The Spectator has grown tremendously over the past 100 years. The program is projected to continue its growth and advancement in years to come.

The Spectator would like to extend a special thank you to Rita MacAyeal, Archivist and Director of the Library, for her help with understanding the history of the paper.