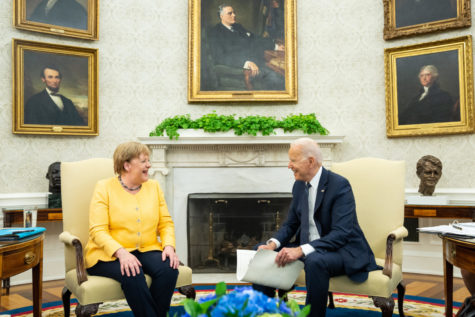 For the past sixteen years, Angela Merkel has served as the chancellor of Europe’s largest economy — Germany. Her leadership of the German Republic throughout the last decade and a half has even led to her being called the de facto leader of the Eunion. However, in October of 2018, Chancellor Merkel announced that 2021 would be her last year at the helm of Germany. Her sixteen years as chancellor have been transformative for Germany and Europe, but one thing is for sure: the Merkel Chancellery will not be forgotten.

Angela Merkel was born in Hamburg, West Germany, but spent most of her childhood in Perleberg, East Germany. Before entering politics, she got a degree in quantum chemistry and for the early part of her career she was a research scientist. In 1989, long before her chancellery, she began her political career in the wake of the reunification of Germany, briefly becoming the deputy spokeswoman for the government of Lothair de Maizière. In 1990, she won a seat in the Bundestag. In 1998 she was elected the leader of the Christian Democratic Union (CDU), a prominent German political party. In 2005, Merkel became chancellor when her party, the CDU, won the 2005 election, and since then she has won three consecutive elections — most recent being in 2018.

Merkel came into power during a transformative time for the Germans – during the post-Soviet unification. Germans had to make a country so long divided by foreign, ideologically opposed powers into one cohesive nation. Secondly, the 1990s and 2000s were a novel time for many Europeans as a whole, not just Germans. Intergovernmental and economic organizations such as the European Union had been christened to prevent the circumstances that led to Germany’s divide in the first place. Merkel had been one of the most enthusiastic supporters of this new “united” Europe. She saw a world where Germany, Europe’s new largest economy, could lead the push for European integration. However, Merkel still had to find a way to balance her time with Germany internally. The Great Recession and the European Union debt-crisis were major challenges to Merkel’s pro-Europeanist agenda. These unforeseen crises were often scapegoated organizations supported by Merkel such as the European Union and NATO.  History and social science teacher, Dr. Aviral Pathak, said that “Germany certainly did not take a back seat in Europe during this period, even if this meant that the Merkel government’s demands for persistent austerity measures, in order to economically and politically discipline what were seen by EU powers as fiscally irresponsible member nations, proved to be quite unpopular…”

While, according to Pathak, Merkel’s resignation will have “…no serious and direct impact on our community at LFA,” as many students with either German roots or nationality have never experienced a world without Merkel at the helm. On a global scale, it is likely that much of Germany’s alliance with the United States will remain strong, although it is unclear whether Merkel’s successor will hold the same preeminent position that Merkel held for so long over the rest of Europe.