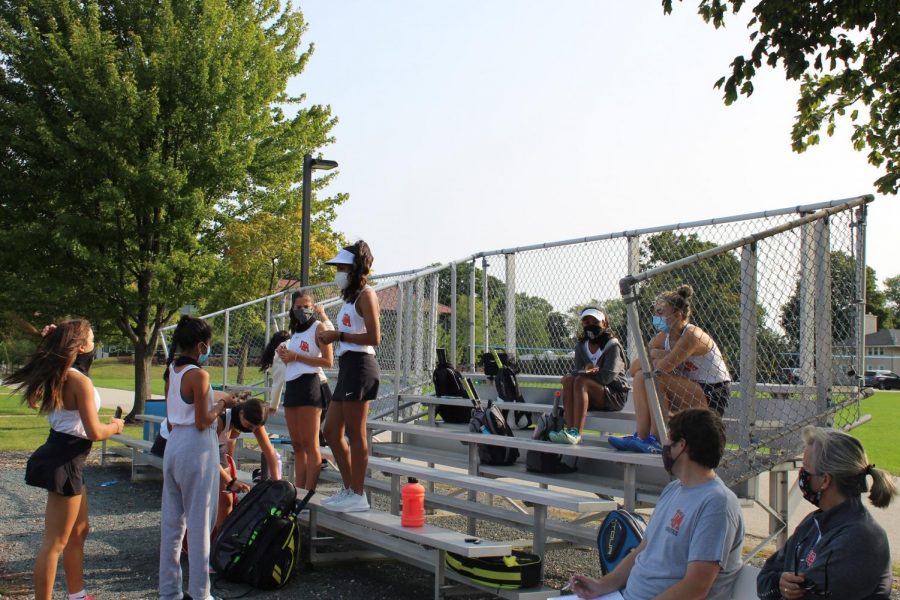 Wearing masks and being socially distanced during the school day has become a norm, how does each fall sport stay socially distanced at practice? From Cross Country to Prep Hockey, each sport is trying its best to abide by the social distancing protocols and mask-wearing during, before, and after practice. Though each sport may differ between wearing a mask or gaiter, or when you have to wear it during practice, every sport still follows the same rules once the athletes walk into Crown Fitness & Wellness Center (Crown). Any athlete, faculty member, or staff inside Crown must abide by the new COVID-19 protocol, which means that everyone has to wear a two-layered mask with no ventilation devices inside. Many sports have their own safe ways of going about practice.

At cross country practice, the athletes “run on trails that are 6 feet wide so two people can run side-by-side yet stay socially distanced”, says Emily Schroeder ‘22, a cross country runner. Schroeder says it also helps that everyone runs at a different pace so that it is easier to remain socially distanced. Since the athletes at cross country aren’t running all the time, it is a necessity that they keep their masks on while taking breaks, warming up, or when they are not socially distanced, which can be applied to the majority of the other fall sports. At cross country meets, runners, run in multiple heaps and begin at different intervals so that they are more spread out. Runners from different schools have designated areas and must keep their masks on before and after races.

Girls tennis hasn’t had too much trouble being socially distanced at practice since it is much easier to be spread out on the courts. Not only are the tennis players able to play with gaiters but they also do not have to wear masks at all during practice. The only times that the athletes have to wear their masks is when they are in the locker rooms and near other students off of the tennis courts. Each person on the team has their own set of six tennis balls that no one else on the team is allowed to touch so they stay sanitized throughout the entire season. It minimizes the need to sanitize the tennis balls after every practice. Also, during matches, athletes no longer shake hands at the start and end of a game. During each match, a new can of tennis balls are opened for both the opposing team and LFA athletes on the courts.

Girls swimming is the only indoor sport as of now and has to follow even stricter rules while at practice. From the locker room to the pool, masks stay on at all times until the athletes get into the water. “Anytime the athletes are outside of the water they have to be wearing a two-layer mask”, says Bela De Jesús ‘22 a swimmer on the Girls Swim team. She also mentioned that while the swimmers are in the pool there are only two students allowed per lane, and they are always at opposite ends of the pool. She states that they are never on the same side of the lane above water, says De Jesús.

Athletes are allowed to take a breather from wearing their masks on the golf course since they have the ability to be socially distanced. While at golf practice, if you walk far apart from other players you are able to take your mask off. Since the athletes’ golf in groups of fours, “the only time you have to wear your mask is when you are closer than six feet and then you can take it off while actually hitting the golf ball”, says Varsity Golfer, Akhil Kommala ‘22.

Prep Hockey captain, Thomas Langston ‘21, spoke about how the athletes at practice have to stay socially distanced since they don’t need to wear a mask underneath their helmets. Prep hockey players only have to wear masks off the ice and in their locker rooms mentioned Langston. While doing drills on the ice the players make sure to be as spread out as possible. Even though every sport differs as to how they wear their masks and how they stay socially distanced, it all comes together since we are a community trying to keep each other safe.