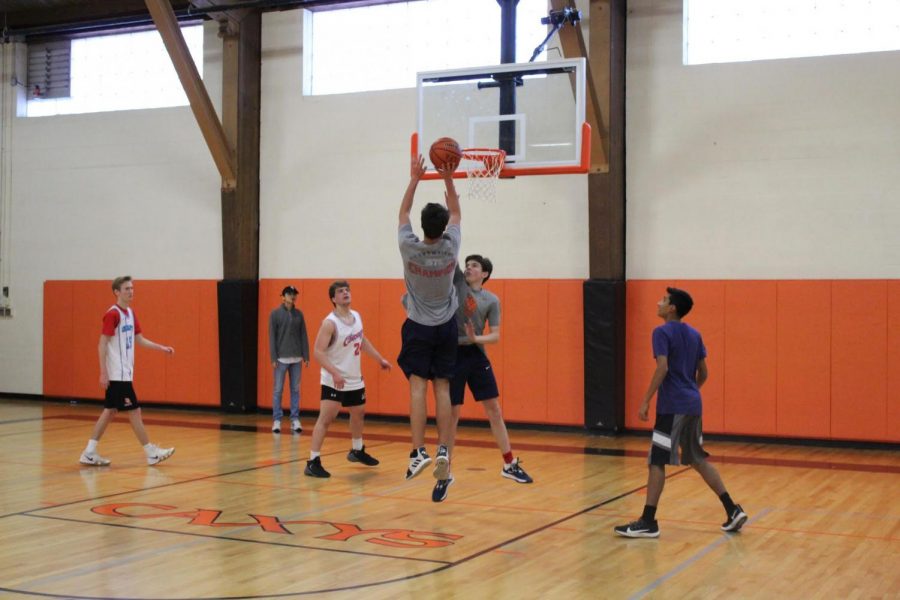 Around LFA there is a new winter PE this year that, even if they are not participating, everyone seems to know
about. Its consistently funny and entertaining morning meeting announcements have made it famous among the
general student body at LFA, and its arrival at a time when JV two basketball has been taken out as an option for
athletes in the winter has led to its success. This winter PE is 3v3 basketball.
In years past, boys basketball has been a huge winter sport at LFA, since it had three teams: varsity, JV, and JV two.
However, this year the JV two program was no longer offered at LFA. When asked about 3v3’s relationship with the
absence of JV two at LFA Mr. Madeley said, “It was probably a better fit considering the year before it was tough to
find competition for JV two… This [3v3]was more suited for them to have fun and to have a great competition.”
The 3v3 basketball league met every G-day and saturdays in the morning. On G-days many kids played in their
games and practices, while on Saturdays kids who had games would come in and play. The league had an average of
about 25-30 active players every week, according to league co-founder Chris Rhoades.
The success of 3v3 basketball school-wide is inseparable from their morning meeting announcements which have
become famous. Whether they are taking awkward pictures with Chick-Fil-A employees or comparing some of their
league’s players to the greatest athletes of our time, the group of boys who go onstage (typically Constantine
Alexos, Chris Rhoades, Ed Nunez, and Ayush Vashi) always manage to garner excitement and a laugh from the
LFA community.
When asked about his process in making morning meeting announcements, league commissioner Constantine
Alexos ‘21 said, “I want our morning meeting to be something people look forward to and when we are called on
the stage I hope excitement and anticipation builds. I really want them to be funny and creative. I especially love it
when people come up to be after and tell me how much they love them. That really means a lot to me.”
With the 3v3 league being in its first year of existence there are also some things that people would like to see
changed if the league were to return for another year.
“I would like to see more of the girls who want to join in and play on teams. I think if it’s promoted so they
understand that they can join and play too then they can find a lot more [players].” Said Mr. Madeley.
3v3 Player Matthew Nocella ‘21 said, “Solicit times and make them in stone rather than them being on the whim.”
Alexos shares these concerns and when asked what he would change he said, “Next year I want to be more
organized. I think it is vital to be organized and carefully plan out the year. This year we didn’t know what to expect.
We just went along with it and saw where it would take us. But I don’t want to be repetitive. I don’t want my senior
year to mirror my junior year. I want to bring in new innovative and creative ideas and events to the people and
League.”
The people behind 3v3 basketball were passionate to make their club ingrained in the community of LFA. It was this
passion that drove them to make the league and take on such a big project in creating this winter PE. When asked
what the process was like for making a successful club at LFA Alexos said, “Everyone could do what I do. I’m not
doing anything special or different. I just started, had a vision, and had passion and that is all you need to create
something that can make a difference.”