Cubs Title is over a century in the making 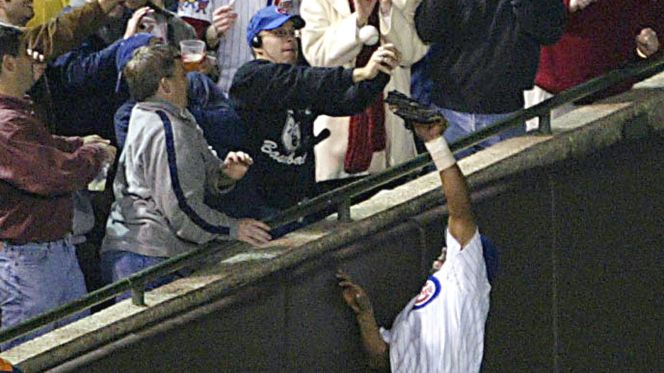 Steve Bartman and Moises Alou will forever go down in Chicago Cubs lore, but nor for the right reasons. Photo Courtesy of FOX Sports.

After 108 years, the Chicago Cubs are finally back on top.  The lovable losers are no longer the laughing stock of baseball.  The season was a roller coaster as the Cubs started out winning 25 of their first 31, but their rough end to the first half of the season had them with a 53-35 record.  When the second half started the Cubs looked refreshed and ready to play.  The team finished the year with a 103-58 record, best in baseball.  Going into the playoffs Cubs fan were as nervous as ever, and how can you blame them.

The history of the Chicago Cubs has always been one of “so close yet so far away.”  Start from the beginning, on October 14, 1908 the Cubs throw a shutout to defeat the Detroit Tigers and win back to back World Series titles.  They are the best team in baseball, and have dominated the early 1900s. October 6, 1945, the cubs are once again in the World Series, it’s their seventh time playing in the World Series since they won their last title in 1908.  Billy Goat Tavern owner, William Sianis, attends game four of the World Series, but he is denied access into Wrigley Field.  Out of frustration, Sianis puts a curse on the Cubs, allegedly saying, “Them Cubs, they ain’t gonna win no more.” The Cubs end up losing in game 7, and this sparks one of the worst runs in professional sports.

The Cubs go 39 years without making the playoffs, finally in 1984 the Cubs win the National League East where they play the San Diego Padres in the 1984 NLCS.  1984 felt like it was finally the Cubs year to break through and win the World Series for the first time since 1908.  The Cubs had a balanced team with their starting rotation dominated by star pitchers Dennis Eckersley, Steve Trout, and Rick Sutclife, along with a young superstar in Ryne Sandberg.  The series went to a fifth and deciding game.  The Cubs were on the verge of advancing to the World Series.  They were leading 3-0 after five innings, but in the 6th and 7th inning the Padres came back to take a 6-3 lead, the Cubs could never come back.

18 years later the Cubs were in a familiar place.  They were once again one of the best teams in baseball, and this was due to a solid balance of starting pitching and bats.  The Cubs were up 3-2 over the Marlins.  They would come back home to try and clinch their ticket to the World Series in front of a rocking Wrigley Field.  The Cubs started out hot, putting up three runs through the 7th inning.  Mark Prior was on his A-game.  He had pitched 7 shutout innings allowing only 3 hits, but then the 8th inning happened.

The 8th started with a line out by Mike Mordecai and then Juan Pierre doubled to left field.  Luis Castillo came to the plate and worked his at bat to a 3-2 count.  On the 8th pitch of the at bat, Castillo hit a ball foul that was slicing into the crowd.  At the last second, the wind blows the ball back into playable ground, and Moises Alou jumped up and tried to make a heroic catch.  Now Infamous fan, Steve Bartman went for the ball and Alou dropped it.  The momentum immediately changed.  Cubs fans sunk in their seats, while the Marlins’ bats woke up.  The next pitch of the at bat was a ball and a wild pitch.  Castillo took first and Pierre advanced to third on the error.  Ivan Rodriguez, the next batter, gets a single and all of a sudden the score is 3-1.  Next up, Miguel Cabrera, hit right to Alex Gonzalez which should’ve created a taylor-made double play.  However, Gonzalez bobbles the ball and everyone is safe.

Although this play isn’t nearly as talked about as the Bartman play, it is just as important, if not more.  The Cubs would’ve got out of the inning with minimal damage, but instead the inning continued and there was only one out.  The floodgates opened up and the Marlins couldn’t stop scoring.  They scored 8 runs in the 8th, and won 8-3.  Even though there was still a game 7 to be played, the Cubs looked defeated.  It seemed as though they were truly cursed.  Game 7 turned out to be heartbreaking once again.  The Cubs went up 5-3 but lost the lead and the game 9-6.

The disappointment in 2003 crushed Chicago.  The Cubs had taken Chicago’s heart time and time again.  In 2007 and 2008 the Cubs had promise as they won the NL Central, but both years were swept in the NLDS.  The next six years were some of the least memorable in the team’s history.  The Cubs were bad, really bad.  In 2011 the Cubs decided to go change their losing ways when they hired Theo Epstein to become the team’s President of Baseball Operations and Jed Hoyer to be the team’s General Manager.  The Cubs were officially in rebuild mode, and they did it well.  Management hit on numerous acquisitions to build a championship contender.  In 2012 they traded for Anthony Rizzo, a possible future Hall of Famer and a 2016 MVP candidate.  In 2013 the Cubs traded for Jake Arrieta, a CY Young winner, and in that same year they drafted Kris Bryant, a possible future Hall of Famer and a 2016 MVP candidate.

While everyone knows about these three big acquisitions, the lesser known trades have played a large role in the scope of the team.  In 2012 the Cubs traded Ryan Dempster for little known pitching prospect Kyle Hendricks.  Hendricks led baseball in regular season ERA, and he lowered it in the playoffs.  Two years later, the Cubs traded pitcher Jeff Samardzija for Addison Russell.  Russell has become the teams most consistent fielder as well as a one of the best bats on the team.  The work by Hoyer and Epstein came front and center when the Cubs advanced the NLCS in 2015, a year ahead of what they expected.  Coming into the year the Cubs were the favorites in Vegas to win the World Series, and this continued at the start of the postseason.

The 2016 playoffs started with a tough series against the San Francisco Giants, a mature team ready for October baseball.  The series started with two wins for the cubs, setting up a premier matchup between 2015 Cy Young winner Jake Arrieta, and King of October, Madison Bumgarner.  The game will go down as one of the best ever played, but it wasn’t because of the starting pitchers.  In the 8th inning the Giants scored three runs to take a 5-3 lead going into the 9th.  The Cubs superstar 3rd baseman, Kris Bryant, tied the game up in the 9th with his two run homer. The game went 13 innings with the Giants winning 6-5.  The next game the Giants completely dominated. Matt Moore dominated the Cubs for 8 innings, allowing only two hits and two runs.  In the 9th inning the Cubs came back to score 4 runs and take the lead.  Chapman came in to closeout the game, and he sent the cubs to the NLCS.

The NLCS started with the Cubs being heavy favorites to advance to their first World Series in 71 years.  The only concern for the Cubs was that they’d have to beat Rich Hill or Clayton Kershaw.  Going into game 4 the Cubs were trailing 2-1, and they had not scored a run in two games.  Game 4 started with some controversy.  In the bottom of the 2nd the Dodgers 1st baseman, Adrian Gonzalez, was calling out at home on what appeared to be safe.  After that, the Cubs took control of the game and blew out the Dodgers 10-2. Game 5 started out close, but once Addison Russell hit a two run homer the Cubs couldn’t be stopped.  Game 6 was all about one man, Kyle Hendricks.  He was untouchable, allowing only two hits.  The cubs faced the minimum, shutting out the Dodgers 5-0 and advancing to their first World Series since 1945.

Next up was the World Series.  They would face the Cleveland Indians, who had dominated the AL.  In their first two rounds the Indians were 7-1, trailing only once.  Right away, the Indians blitzed the Cubs.  Corey Kluber struck out nine in six innings of work and shutting out the Cubs.  Chicago put up a goose egg in game 1 as they were unable to take advantage of their opportunities.  In game 2 the Cubs bats woke up.  They drove in five runs , and that was more then enough for Jake Arrieta. Game 3 featured a pitching duel.  Coco Crisp’s pinch hit RBI was enough for the Indians to take game 3.  Game 4 was another great performance by Corey Kluber.  He only allowed one run in six innings of work.  The Indians bats also played well, providing their pitchers with seven runs.  After game 4 the series was thought to be all but over.  The Indians were up 3-1, and the Cubs could not score runs.  Game 5 was very close.  The Indians took an early 1-0 lead, but the Cubs scored three runs in the 4th inning, including a home run by Kris Bryant.  In a close game the Cubs relied on Aroldis Chapman to get an eight out save.  He came through allowing no runs in a 3-2 game.  Game 6 was a much needed victory for the Cubs.  They scored runs early, and their pitching was solid.  Game 7 was a rollercoaster of a game.  The Cubs came out with the win, making them World Series Champions for the first time in 108 years.

This run meant everything to the fans.  The Northsiders have always been known for there inability to finish the deal, but with the culmination of a Cubs World Series, everything has changed for Chicago.  Cubs fans rejoiced.  Dads embraced their sons, families were together.  Everyone in Chicago was a family during this run.  Anyone and everyone was a member of the blue and red community.