Best Burgers for your Buck 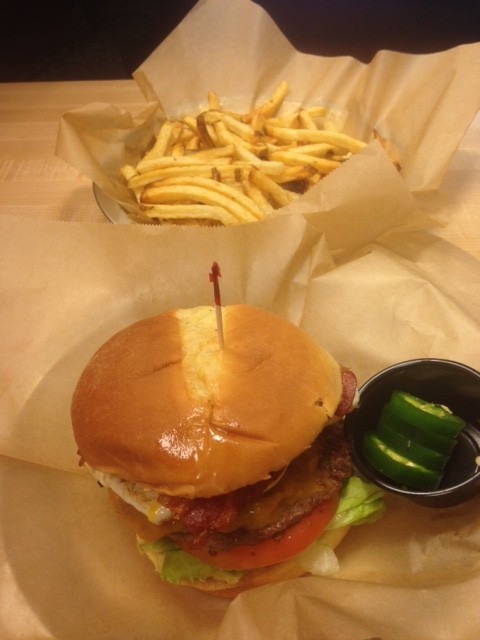 The top burger on our list! Meatheads double patty with bacon and lettuce with a side of fries.

Chicago is considered one of the top food markets nationwide. In fact, Chicago was ranked 3rd by Thrillest.com in a recent ranking article called “Biggest Cities Based on their Food.” Along with being famous for Pizza, the Windy City also holds claims for being one of the top five places to get a burger in the Midwest. However, as far as expense goes, Chicago is notoriously pricey, and it can be hard to find a quick bite that’s sparing on the pocket book. That is why my partner, Obaid Ansari, and I, embarked on a mission to find the top six burgers for your buck. We ranked our restaurants based on price, taste, time, appearance, service, options or “menu size” and random accommodations. Here (drum role please) is what we found!

Accommodations: Interesting because it is situated right next to the downtown Deerfield Metra North Line station. A good bite for after work.

Trax is actually the only restaurant on our list that was a formal sit down restaurant, where our waiter serviced us and took our orders. It is, in all essence, a sports bar right off of Deerfield Road that people can swing by after work, or have a nice family dinner. The building also has space for a party room. The food, we thought, was average. We had a burger with pulled pork and lettuce on ciabatta bread. In spite, I was able to “build my own burger” which was something that stood out for me. Trax also offers Spreacher Sodas on tap! Even though it took the bottom spot on our list, Trax was still extremely tasteful.

Accommodations: Luke’s has a very rustic feel, with a classic “Sports Authority” sign from the 90’s on the front of the ordering counter. Great little place.

Luke’s has been a curiosity of mine ever since I can remember. Since I am from Lake Bluff, I can’t ever stop but notice the building tucked away in its own lot next to a smoothie shack that looks like the CDC apprehended it. There always seems to be the exact same number of people, but all of them are happy and enjoying their artery-clogging, but delicious, meals. I had a regular Hamburger, nothing on it. It was fantastic. I didn’t even need to put anything on it! I also kept my Hamburger, medium fries and soda meal to under $10. The only reason that Luke’s isn’t ranked higher on our list is because the choices are limited. The menu is the menu. Also, their specialties are not burgers. I learned that Luke’s is the place to go or a killer Gyro or skirt stake sandwich. All in all, I will definitely be returning to Luke’s in the future.

Accommodations: Graffiti Grill, unlike all the restaurants on this list, serves breakfast!

Graffiti Grill is a hometown favorite for anybody from Lake Bluff. I have had almost everything on the menu, including breakfast, which they serve all day. They open late and close early, and they cater to mostly older folk, which is also why they are most busy in the summer. They offer all of my favorite things: breakfast, tater-tots, and milkshakes. I had my usual hamburger with lettuce, a side of tater-tots, and a chocolate milkshake. I was impressed as always, and for the price, it was extremely worth it. I would definitely recommend Graffiti Grill if you are every in the Lake Bluff area! Their menu is large, and they know what they are doing. P.S. they also have old car shows on Sundays, and they have outdoor seating.

Accommodations: Fresh, free peanuts when you walk in, as well as two Coca-Cola Freestyle® soda machines.

Ahh yes, Five Guys. I have been a personal fan of the chain ever since I ate at one in Tampa, Florida when I was ten. Honestly, I think this is the best burger on our list, but the menu is limited and a tad pricey. Also, even though it took seven minutes for our burgers to reach us, it felt like seven hours. Still, the Coca-Cola Freestyle machine trumps all that, with over 100 drink options. Other positives include the chef’s not really giving a hoot about how much fries you get, because they literally take them from the frier to the bag, no container what so ever. You will never be disappointed if you go to Five Guys. Their burgers are out of this world!

Accommodations: Excellent Milkshake options, as well as their special sauce that called “Shack Sauce” which you can also choose to put on your fries.

Chicago is doing its best to catch up to New York and the East Coast, but they have succeeded in landing three Shake Shack locations on the North Shore and in Downtown. Shake Shack is Five Guys on steroids- three times the menu size, five flavors for milkshakes, and better fries. I also enjoyed the trendy feel there is for Shake Shack. Even though it might be a tad pricey, it is extremely worth it. What specifically stands out to me is the menu, you can put anything from an avocado to an egg on anything from a burger to a chicken sandwich. Ordering at Shake Shack is actually fun! I’m so glad they opened one in Old Orchard, but I probably would’ve made the trip to the city if they hadn’t. It’s just that good.

Accommodations: Coca-Cola Freestyle®, Cajun Fries, Milkshakes and style. This is the best burger for your buck in Chicagoland.

Every time I bring up a strip mall that contains Meatheads, I get a response of “Oh and can we stop by Meatheads?” Of course we can. Meatheads has everything 5 Guys, Graffiti Grill and Shake Shack have to offer, with there own twist, and everything just tastes better! I really don’t know how else to describe it. It’s inexpensive, fast and tasty! What is also really cool about Meatheads as a company is each restaurant is customized for the respective town. For example, the Lake Bluff Meatheads has full wall collages of the downtown Lake Bluff area. They also have a standings board with the football scores from the surrounding high schools.  I cannot describe the tastes and happiness that embraced that building. It is deservingly #1 on our list!

So there you have it! The top six Burgers for your Buck! What should Obaid and I review next? Make a suggestion in the comments below.